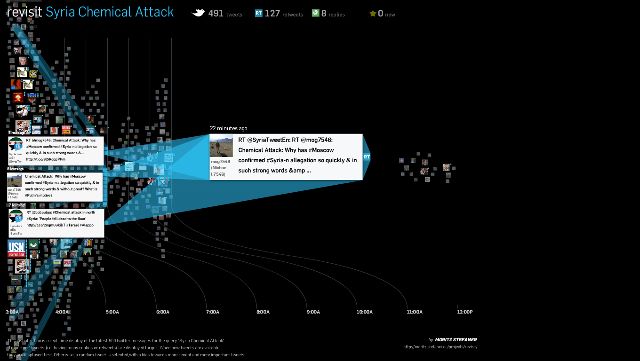 CBRNe World has been monitoring social and mainstream media in Syria for the last year. So new allegations of CW use was not a surprise, but what does it all mean?This short placeholder gives you the key information you need to know

At CBRNe World we have been monitoring media on Syria. The picture attached shows a thematic analysis against time for today on tweets about Syria. High resolution imagery of analysis is available on request.

In the small hours, GMT, of Tuesday Stories started to emerge about the use of chemical weapons.

This was the start of dissemination by the SANA, the state media in Syria. As information trickled out and twitter lit up with retweets, lending a false sense of credibility due them all being from the same source, it became apparent accusations centred around a missile/rocket strike. Possibly by a SCUD with chemical warhead.

Pictures and YouTube videos, always fast to arrive in accusations to date were unusual in that they didn't emphasise false or presumed symptoms as was seen in some previous allegations back in 2012 (where there was a lot of effort to demonstrate unusual burns). You just can't diagnose by these pictures and videos so their value is a bit moot. But they do seem to present patients in a state of incapacity with no obvious physical injuries. Chemical agents might be responsible, but one can't conclude that without any doubt.

Slightly behind curve the opposition groups started to retort that the attacks were by the Syrian Government on them. Interspersed with this were continuous calls for interventions from all sides. The Syrian Government (Assad) has made repeated calls for UN investigation, particularly citing videos seen earlier in the year which seemed to suggest groups had got hold of chemicals from a Turkish Company. The video showed them being tested on and killing animals - although they seemed primie facie to be more suited to homemade explosive production than Chemical Weapons.

Turkey has retorted angrily. No stranger to accusations themselves with fairly continuous allegations by Kurdish groups against them.

Meanwhile it does not appear that a formal request has been made to the OPCW for investigation. Syria isn't a state party so one presumes they can't ask the OPCW to investigate, but it wouldn't seem unreasonable for the UN to actually do something and offer a formal investigation team to Assad. Once again hands are being wrung and nothing is done. Meanwhile NGOs such as WHO continue to try to deliver aid, unsure precisely as to the risk to their staff and contractors.

Today has seen the activity continue fairly steadily. The graphic at the bottom shows twitter activity by user across the day for the terms Syria and Chemical Attack. In the morning it tailed off and then surged in response to some Israeli Statements saying they were fairly sure chemical weapons had been used - though this was a quick statement from a newly appointed intelligence official. Similar ambush quotes of US politicians have created headlines with little substance. The lines to note are, 'requires verification', which is diminished against the main rhetoric which is directed towards perceived inaction by President Obama regarding his red line.

Amidst this it might have been easy to miss the 'other' attack that occurred around the same time in Homs. According to information posted on the video sharing site YouTube, a second chemical strike took place in the city of Homs — specifically, in a neighbourhood called Bab Amr. The video shows people in near darkness “choking and losing consciousness due to usage of toxic gas.” It was posted by a local rebel council called Bab Amr in the Eye of the Revolution.[Thanks to the website Vocativ for this].

Countries have lined up to condemn regardless of who is to blame. But for now there is little gritty detail - even some pictures from the site or near the site.