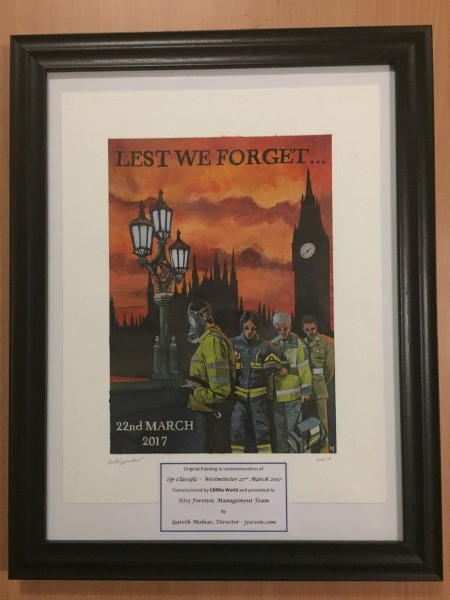 A silent auction of two of Nick Spender's pieces of original artwork, one a specially commissioned piece, raised money for police victims of March 22nd attack

The CBRNe World office, like most people, were stunned by the events of March 22nd 2017 where a terrorist mounted Westminster bridge mowing down civilians and two police officers before murdering PC Keith Palmer. It was more poignant for the team as our CBRNe World event was opposite the Houses of Parliament and various members of the team had been regularly walking across the bridge in the preceding months. As such we felt that we needed to try and raise some money for the victims and commissioned Nick Spender, our regular artist, to create a commemorative image for the event. In addition to this picture we included the February 2016 cover of CBRNe World - Putin's tea party - and the commemorative print was auctioned on the first day and the Alice/Putin one on the second.

In a further twist the successful bidder of the Commemorative image from the Australian CBRN product and training provider J37 found that one of the first policemen to the scene was a member of the SO15 Forensic Team that was attending the event. In a fantastic show of altruism the purchaser decided to donate the picture to the team for them to use as a commemoration of OP. Classific.

The auction raised £400 which will be donated to the Metropolitan Police Federation to be disbursed among the victims of the attack.