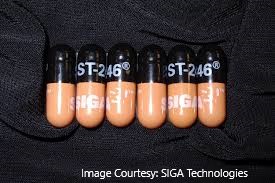 SIGA Technologies announced today that they have been awarded a multi-year contract by the U.S. Department of Defense (DOD) to support the work necessary to gain a potential label expansion for TPOXX that would include its use for post-exposure prophylaxis (PEP) for Smallpox.

The contract is valued at up to $19.5 million, with an initial award of $12.4 million.  The initial funding will support several activities, including manufacturing material for clinical trials, initial preparation for a human clinical safety study, and assembling regulatory filings that SIGA has designed with input from the U.S. Food and Drug Administration (FDA) to evaluate the use of TPOXX for PEP. As previously announced, SIGA is already working with the U.S. Army Medical Research Institute of Infectious Disease on animal studies to evaluate the efficacy of TPOXX as a potential PEP therapy for smallpox.

The use of TPOXX for PEP could provide significant potential benefit in the event of a smallpox outbreak.  While vaccines would play an important role in containing the spread of smallpox, the vaccines are only effective if administered prior to infection or no later than four days after infection. However, symptoms of smallpox do not typically appear until approximately 14 days post-infection, and there is currently no diagnostic test to determine infection prior to symptom onset. Given the uncertainty of an individual’s infection status in that two-week period, and the highly contagious nature of smallpox, the administration of vaccine in combination with TPOXX could potentially be an important strategy for reducing morbidity and mortality in a smallpox outbreak.

“During our FDA Advisory Committee meeting in May 2018, several committee members emphasized the importance of evaluating the potential use of TPOXX not only to treat smallpox symptomatic infection, but also to treat patients with known smallpox exposure who have not yet developed symptoms,” said Phil Gomez, CEO of SIGA Technologies. “An expansion of the TPOXX label to include its use for PEP would provide greater flexibility to deliver TPOXX to those who might benefit from treatment during a potential outbreak. We have successfully collaborated with a number of U.S. government agencies in the development and approval of TPOXX for the treatment of smallpox, and are pleased to be working with DoD on these important studies.”

On July 13, 2018, the FDA approved oral TPOXX for the treatment of smallpox to mitigate the impact of a potential outbreak or bioterror attack. TPOXX, a small-molecule antiviral treatment for smallpox, is the first therapy specifically approved for this indication, and was developed through funding and collaboration with Biomedical Advanced Research and Development Authority at the U.S. Department of Health and Human Services, as well as early stage development supported by the National Institutes of Health, U.S. Centers for Disease Control and Prevention, and DoD.