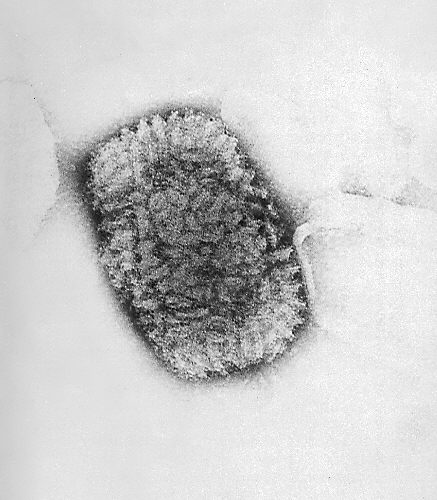 Zhilong Yang, an assistant professor in the Division of Biology, is the principal investigator on a new, nearly $1.9 million grant from the National Institutes of Health. The five-year project will study how vaccinia virus — a member of the poxvirus family — produces its proteins. This award is from the Research Project Grant Program, usually referred to as R01, and is considered the bread and butter grant of the NIH for biomedical researchers.

The NIH has continuously supported Yang's research on vaccinia virus through multiple awards in the past five years, when he opened his laboratory at K-State, including a Pathway to Independence award, an Exploratory/Developmental grant award and a Centers for Biomedical Research Excellence project, in addition to the R01 award. Yang's group has made a series of remarkable discoveries on this topic.

Vaccinia virus was used as the vaccine to eradicate smallpox, one of the deadliest infectious diseases in human history. Both vaccinia virus and variola virus, the latter is the causative agent of smallpox, belong to a large family of virus called poxvirus. Although smallpox was eradicated 40 years ago, many members of poxviruses currently cause significant public health issues in humans and economically important animals. There is also a concern that smallpox may arise from unknown stocks or other means.

Vaccinia virus, along with many other poxviruses, also has tremendous potential in fighting cancers, because it can selectively kill tumor cells. By engineering the virus to be less harmful to healthy tissues but to kill tumors more efficiently, scientists are developing highly promising new cancer therapeutics.

This grant will help Yang and his colleagues in his laboratory to answer a fundamental question: How does vaccinia virus produce viral proteins? This is an important question to understand how the virus amplifies itself, as proteins are building blocks to make viral particles. Interestingly, viruses do not have the machinery to make proteins by themselves. Instead, they must use their hosts' protein-making machinery. This makes the question even more intriguing: how does the virus redirect the host protein-making machinery to produce viral proteins after infection?

Answers to this fundamental question could provide new strategies to block poxvirus infection and improve the efficacy of poxviruses used in vaccine development and cancer therapy.