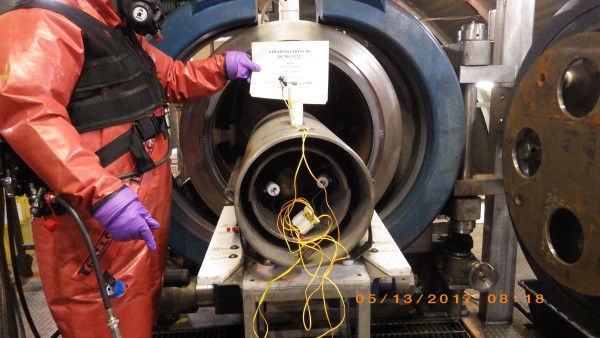 “We have a team that worked for months to ensure all the requirements for safety, environmental compliance, logistics and funding were in place to accomplish this mission,” said Laurence Gottschalk, director of RCMD.

Nora Hawk, the USACE Louisville District Project Manager for SVDA, said the project was “truly an excellent and successful example of multi-agency and multi-discipline team collaboration.

USACE works closely with RCMD for remediation efforts at sites that may have buried chemical munitions. A great deal of historical research goes into planning for remediation, and researchers typically have a good idea of what could be recovered at a site. When items with unknown liquid fills are recovered, RCMD sends specialized assessment equipment and a team of experts from CARA, the Chemical, Biological, Radiological, Nuclear and Explosive (CBRNE) Analytical and Remediation Activity, part of the U.S. Army 20th CBRNE Command. Assessment identifies the contents of munitions without opening them, which enhances safe, efficient operations.

After the item was assessed in December and confirmed to contain mustard agent, destruction mission planning began. Policy requires recovered chemical munitions to be destroyed at the closest DoD facility capable of hosting a mission, which in this case was SVDA. RCMD provided a temporary storage facility to SVDA, where the overpacked munition was secured until destruction.

In April, a team led by RCMD project manager Derek Romitti, with personnel from the Edgewood Chemical Biological Center, arrived in Illinois to set up the site for the Explosive Destruction System, the organization’s time-tested destruction technology to safely destroy the munition.

“Just to ensure the site was ready took months of coordination,” Romitti said. “We need to have power, water, security and personnel. Setting up the equipment and actually completing the EDS mission is the culmination of months of effort.”

The EDS is RCMD’s primary method for destroying recovered chemical munitions. First deployed in January 2001, the EDS has destroyed more than 2,600 recovered chemical warfare items in 12 states with an impeccable safety record. The system's main component, a sealed, stainless steel vessel, contains all blast, vapor and fragments from the process. The EDS uses linear shaped cutting charges to explosively access the munition's chemical payload for neutralization. Operators confirm treatment by sampling residual liquid and air from the vessel prior to reopening the EDS.

The process takes place in an environmental enclosure that operates under negative pressure and filters all air through a carbon filtration system. An extensive series of equipment checks, safety evaluations and regulatory approvals are required before operations begin.

Personnel are currently decontaminating the equipment before shipping it back to Maryland. Hazardous waste generated by this operation was shipped to a permitted treatment, storage and disposal facility.