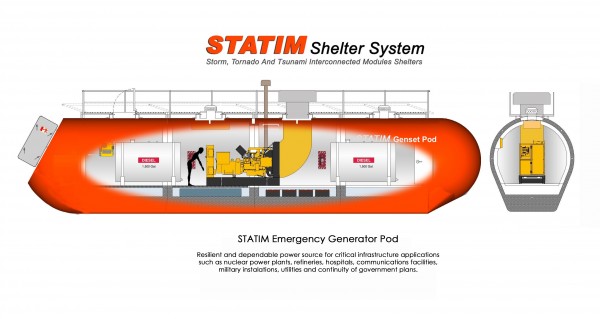 Statim CBRN are bringing their colpro solution to the quick deployment shelter market. Their shelter is designed to fill the gap between traditional lightweight expeditionary shelter offerings (made of fabrics, fiber, polymer or metal), and fixed concrete shelter buildings, offering the protection of the latter in a mobile solution

The system is an enclosed shell structure comprised of a series of pre-cast concrete modules, similar to large diameter drainage pipes, and is radiation dampened by added magnetite and tungsten granulates. Once assembled via gasketed joints, and a post-tensioned cables technique, it provides for a sealed environment protected from CBRN threats. Together with CBRN air filters, food & water, electric power, sanitation and an embedded low voltage cooling system, it is capable of sheltering up to 40 people for several days.

Statim are already in touch with elements of the Dutch MOD and recently showcased the system to other militaries, such as Belgium, Israel, Germany and America.