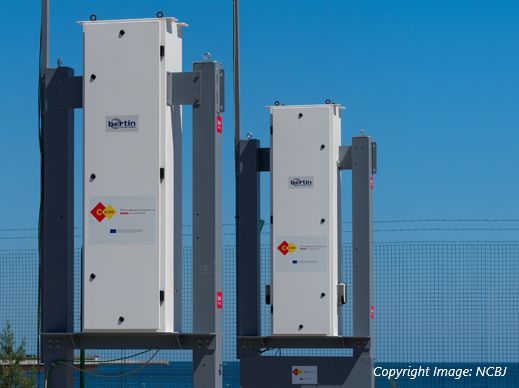 Each year, more and more merchandise transit all around the world and goods control has become a raising issue for customs in a context of terrorism threat. Freight containers in particular are potential means of smuggling illegal items such as nuclear and chemical warfare agents. Thanks to the C-BORD project (Effective Container Inspection at BORDer Control Points), funded by the EU programme Horizon 2020, new technologies have been developed to detect Special Nuclear Material (SNM), that may enter in the production process of dirty bombs or Radiological Dispersion Devices (RDD).

Bertin Technologies has developed in collaboration with the CEA a new SNM detection system for the control of road, rail and container loads. The SaphyGATE GN has been successfully tested by the CEA as part of the C-BORD project: this new generation portal monitor capable of detecting gamma and neutron radioactive sources without using 3He gas underwent a vast series of tests in Poland’s deep-water container terminal, DCT-Gdańsk.

The tests carried out in Gdańsk consisted in demonstrating the effectiveness of the controls based on specially prepared cargo. The SaphyGATE GN proved its efficiency thanks to its state-of-the-art technology, placing it at the forefront of the fight against SNM trafficking.