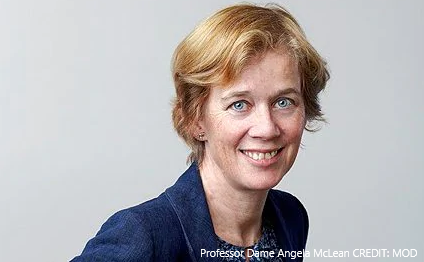 Defence Secretary Penny Mordaunt has announced that Professor Dame Angela McLean will be the MOD’s next Chief Scientific Adviser.

"This is an exciting time to be joining the Ministry of Defence, with so much important research going on to keep our armed forces at the forefront of innovation and technology."

"Britain’s military has a distinguished record in developing and using science and I plan to make sure that we continue to build on that tradition."

"I hope to use my skills and experience from the range of issues I’ve worked on to continue our world-leading reputation in science and technology."

"Congratulations to Professor Dame Angela McLean on her appointment as Chief Scientific Adviser to the MOD."

"She has had a distinguished scientific career to date and will be a significant asset to the department, bringing deep expertise and broad experience across science."

"I would like to extend a warm welcome from me and the network of Chief Scientific Advisers across government, and I look forward to working with her."