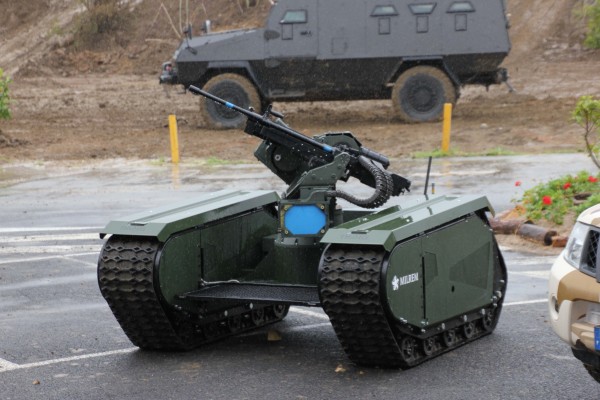 ST Kinetics’ family of ADDER RWS, when mounted on the THeMIS, offers a smart combat solution that will heighten the soldier’s fighting capability and provide a clear advantage for fighting forces. The RWS, which can be wirelessly operated, expands the role of UGVs for tactical deployment and operations. “Armed UGVs can dramatically increase the firepower of military units and can even be a substitute for soldiers in certain tactical situations,” said Milrem CEO Kuldar Väärsi. “We are excited to partner with ST Kinetics, a global technology innovation leader, to jointly create new concepts and products that will help fighting forces achieve their mission.”
The THeMIS (Tracked Hybrid Modular Infantry System) is the first fully modular hybrid unmanned ground vehicle in the world, with a payload of 750-1000 kg. The vehicle can be used for a wide variety of applications. In addition to armed tactical defence, it can also be used as a remote reconnaissance platform, C-IED (Counter Improvised Explosive Device) platform, medevac vehicle and supply delivery device.

Milrem has successfully conducted initial running tests for the THeMIS prototype, the last of which was conducted together with the Estonian Defence Forces (EDF) at the live military exercise Spring Storm 2016. The first live firing test will be conducted with the EDF and ST Kinetics from August through September 2016.
THeMIS is expected to be ready for production by the end of 2106.

\">here to see THeMIS in action