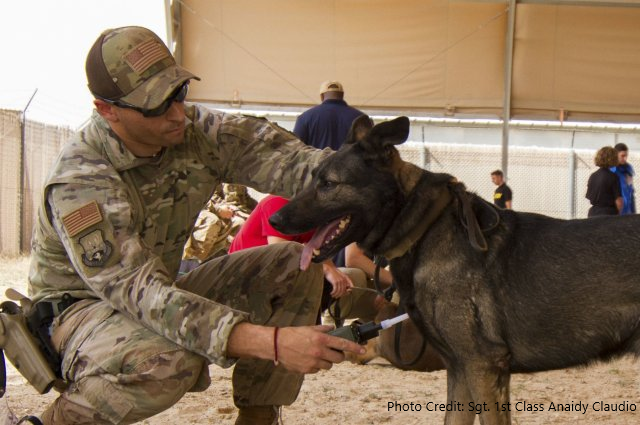 Members of the 637th Chemical Company, the 719th Medical Detachment Veterinary Service Support, and the 386th Expeditionary Security Forces Squadron came together recently to conduct a live exercise to train to save the lives of military working dogs and their handlers in the event they were exposed to a chemical, biological, radiological and nuclear (CBRN) substance.

Sergeant Cory Gwynn, a CBRN noncommissioned officer in charge with the 719th MDVSS, explained training military working dogs and their handlers to prepare for a CBRN exposure helps them plan for risks that they would not otherwise know to prepare for if they did not practice what they would do ahead of time.

"This training gives both sides an opportunity to be prepared in the event of CBRN exposure, which is great because it's not something that is often trained, so the decon element gets to see the dogs and the humans coming through in a live event; there are no dummies. You get to see things that situationally you wouldn't normally see when you are just walking through some training," said Gwynn.

Air Force Staff Sgt. Porschia Easom, a military working dog handler with the 386th ESFS, said this is the first time she conducted this type of training and thought it was a great way to prepare her military working dog, Beki, a Belgian Malinois that does bite work and finds explosives, for what she may experience in the event of a live CBRN exposure.

"She is very wary about new things, so you've seen the little machine that we've been trying to use [Joint Chemical Agent Detector (JCAD)] it makes different sounds, so just to get them used to that, because if a chemical attack does happen everything is gonna be already heightened," said Easom.

The training involved the military working dogs and their handlers going through a Homeland Response Force Mission exposure scenario, which is an exposure event that could happen in the United States. They had a "hot" and "cold" section, hot being the exposed area and cold the area where the decontamination process is complete. Veterinarians and a veterinarian technician were available in the hot and cold areas to check on the MWDs.

"The reason why we're doing this is because traditionally military working dogs don't go through this process of decon, so it's an improved opportunity for us to save lives, assets, and keep the dogs with the working handlers if they were exposed to a CBRN element," said Gwynn.

"It is important to keep the dogs safe because they are not only an asset, they are a battle buddy, and that affects morale for the military working dog units as well as people around them who work with the dogs. The Army keeps an asset right there as well as keeping Soldiers trained."