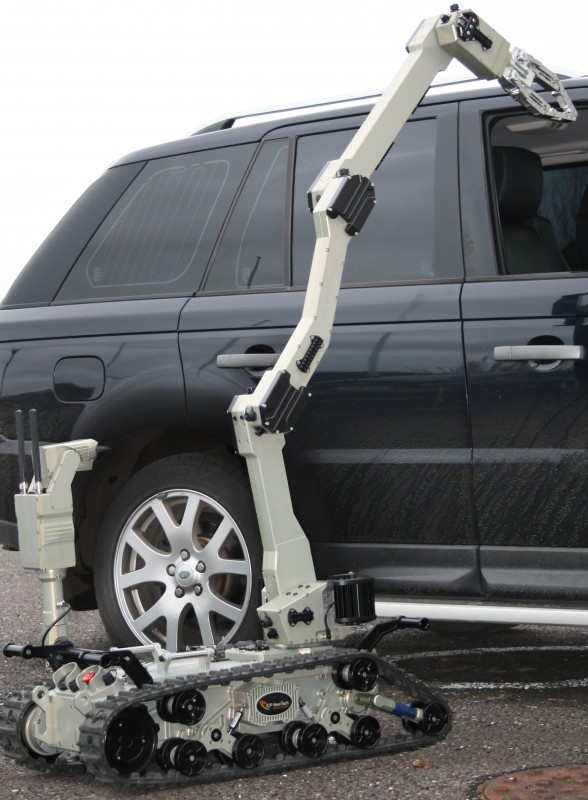 Med-Eng announced today the launch of the Avenger Remotely Operated Vehicle (ROV) at the 2017 SHOT (Shooting, Hunting, Outdoor Trade) Show, Booth #12762. This bomb disposal and tactical robot has been engineered to provide police and military response teams with enhanced capabilities to manage ongoing and emerging threats posed by terrorists, particularly in urban environments where Vehicle-Borne Improvised Explosive Devices (VBIEDS, or 'car bombs’) are of concern.

The Avenger, designed and manufactured by ICP NewTech, is a mid-sized ROV with most of the operational capabilities typically found only in much larger and more expensive robots. Its performance-to-size ratio is outstanding and reflects the advanced electro-mechanical engineering that guided its development. The Avenger’s highly dextrous arm and claw can easily reach inside, above and below cars, pick-up trucks and delivery vans, to remotely investigate suspicious devices, such as Improvised Explosive Devices (IED).

The system includes an on-board computer that fuses data from multiple CBRNE sensors and cameras, and relays it to a command post. This integrated sensor suite provides a mission-critical tool for managing CBRNE and Hazmat threats, such as a terrorist’s 'dirty bomb’, and mitigating risks to the surrounding public. The numerous sensor ports are compatible with many specialized sensors that bomb squads already have, so they can make use of their existing equipment and attach new tools in the future.

In announcing this new urban response tool, The Safariland Group President Scott O’Brien remarked, “We are very excited to present the men and women on the front lines with a sophisticated robot that will allow them to remotely engage hazardous threats with great effect.” He continued, “The safety of first responders, elite military EOD teams and local citizens is of utmost importance to Safariland and this new system will prove to be an integral part of securing densely populated areas across the United States and the international community.”

Eamon Jackson, CEO of ICP NewTech, commented, “We listened very carefully to the needs of end users and recognized the operational challenges they’re facing now and in the foreseeable future. It became clear that response teams needed a robotic platform that could be easily transported through congested urban centers, which meant keeping the robot at a smaller scale. We then applied our engineering expertise to develop a system that could attack a range of VBIED-type threats, overcome obstacles, and give users the freedom to deploy and leverage many of their existing sensors and EOD tools.” He concluded, “The Avenger sets a new high mark that will benefit police and military agencies for years to come.”