“The start of this campaign brings us closer to our commitment to the local and international communities to safely eliminate all chemical weapons in the U.S. inventory,” said Walton Levi, site project manager, PCAPP. “As with current and previous projectile destruction campaigns, safety will remain the top priority as we eliminate the mortar rounds.”

The SDC units are armored, stainless steel vessels, which use thermal destruction methods to destroy munitions. The electrically heated vessels detonate the munitions to destroy the agent and munitions components, and gases are treated by a pollution abatement system.

“SDCs are the safest way to destroy the 4.2-inch mortars and problematic rounds,” said Todd Ailes, project manager, Bechtel Pueblo Team. “After the munitions are loaded onto conveyors, the process is controlled remotely by control room operators, minimizing risk to the workforce.”

Throughout the campaign, the PCAPP team will work closely with PCD personnel. Since the early 1950s, the depot has stored three mustard agent munition types: 155mm projectiles, 105mm projectiles and 4.2-inch mortar rounds. On Sept. 5, 2020, workers completed destruction of nearly 300,000 155mm projectiles, marking the end of the first munitions destruction campaign. Since the start of the 105mm campaign on Dec. 11, 2020, more than 275,000 projectiles have been destroyed. As of Feb. 11, a total of 2,172 tons of mustard agent has been destroyed at the depot.

“For nearly seven decades, the depot has ensured these weapons remain safe and secure prior to destruction,” said Col. Jason Lacroix, commander, PCD. “Our team will continue to work closely with the Pueblo plant until the 4.2-inch mortar rounds are eradicated.”

Under a multinational arms agreement known as the Chemical Weapons Convention, the U.S. is destroying its remaining chemical weapons stockpile located in Colorado and Kentucky.

“The Static Detonation Chamber units are a safe, reliable and proven technology for the Army,” said Michael S. Abaie, program executive officer, Assembled Chemical Weapons Alternatives. “We worked diligently to obtain the necessary permits to ensure these units operate in compliance with all state and federal laws and regulations,” said Abaie.

The Static Detonation Chamber is a type of Explosive Destruction Technology that was first used by the U.S. Army to destroy problematic chemical munitions in Alabama, which completed agent destruction operations at the Anniston Army Depot in 2011. Subsequently, from 2019 to 2021, an SDC was used in Kentucky at the Blue Grass Army Depot to destroy more than 15,000 mustard-filled munitions. The Blue Grass site is now preparing to use two units to destroy drained rocket warheads and overpacked munitions.

In Pueblo, eliminating the chemical weapons stockpile is the Army’s final mission at the depot. An organization known as PuebloPlex is pursuing sustainable, long-term economic development opportunities for the land following chemical demilitarization. 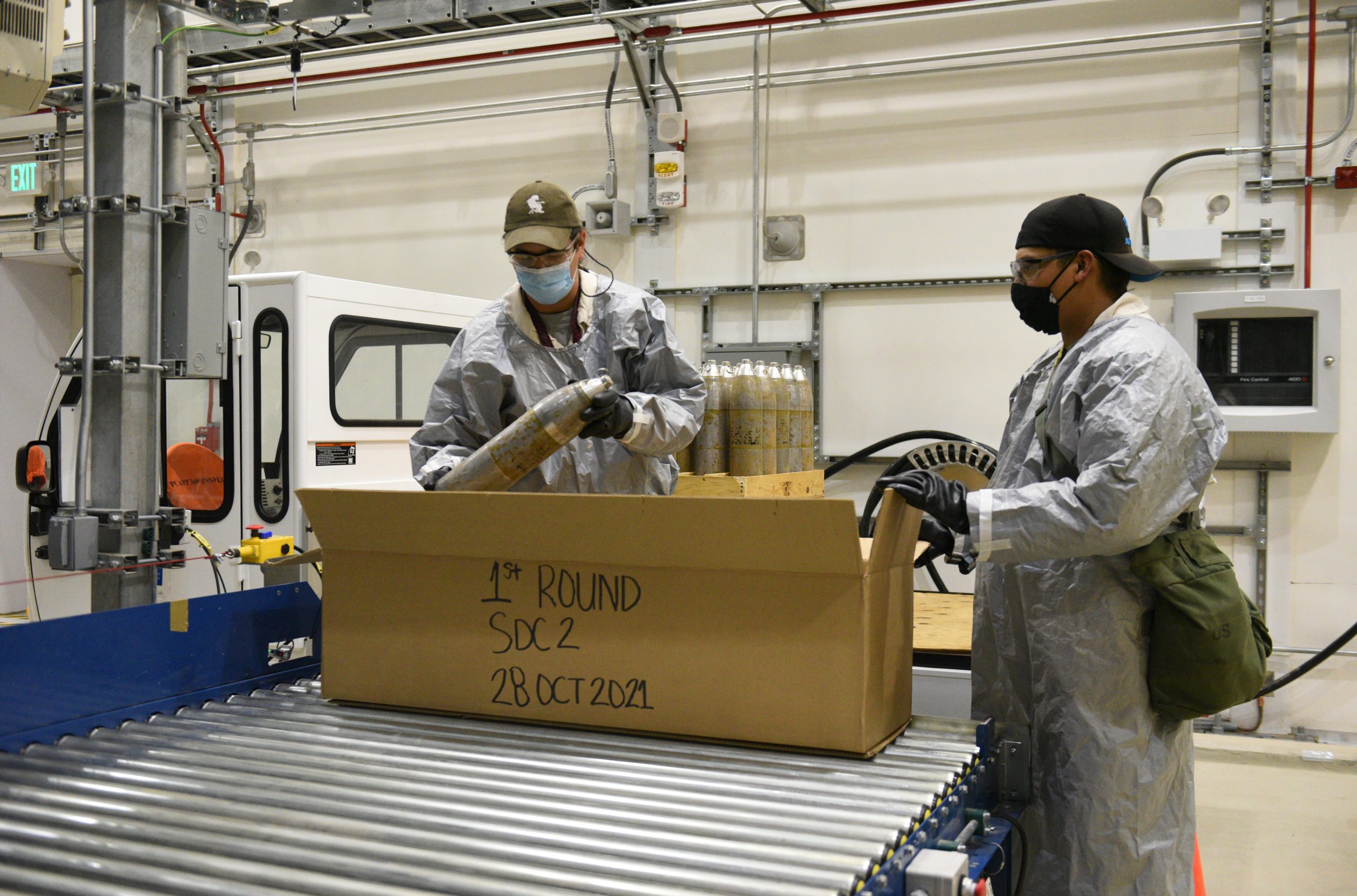