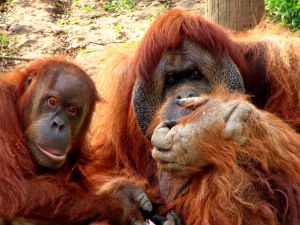 Why, does this monkey taste funny to you?

Large quantities of West African bushmeat being illegally traded worldwide may contain pathogens that pose a significant health risk to humans. A recent study in the scientific journal PLoS One draws attention to a series of findings – obtained by way of tests on a number of samples confiscated at five US international airports – that indicate the presence of herpesviruses, simian foamy viruses [now they sound good! Ed.], and retroviruses in exotic meats such as monkey, baboon, palm civet, and a variety of rodent.

Of primary concern is the possibility that these pathogens might be passed on to humans by way of their consumption and handling. As the study in question puts it, “Nearly 75% of emerging infectious diseases in humans are of zoonotic origin, the majority of which originate in wildlife.” To demonstrate the extent to which interspecies transmission of pathogens poses a threat to humans, consider the fact that both SARS and HIV viruses, as well as BSE, can be traced to zoonotic origins.

Of additional concern is the reality that the bushmeat industry is both expanding and subject to inadequate surveillance. A great deal of time and effort is dedicated to ensuring that our food chain and methods of legal food production are resistant to acts of terrorism; it is vital that we maintain at least an equal measure of vigilance in our regulation of illegal food production.

If escalated measures aren’t taken to monitor the transport of exotic meats at ports of entry and exit across the world, we are in danger of witnessing the pathogens’ entry into the wider public domain, making their containment an extremely complex and potentially fatal operation. Bringing tropical diseases – especially those masquerading as traditional ailments – in to western or northern hemisphere countries is never a good idea, and can have catastrophic effects. FDA/TSA and customs units around the world: make a point of trying to stamp out this illegal trade.

To view the PLoS One article’s findings in full, visit: