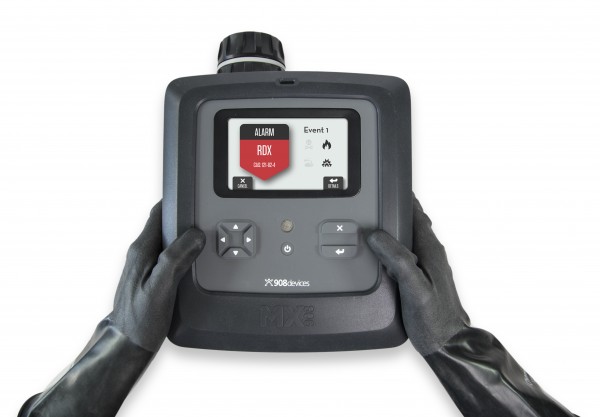 Designed for true trace-level detection and identification across a variety of CBRNE and Hazmat response missions, MX908 complements the success of 908 Devices’ first-generation device M908TM. This device is deployed globally and protects communities across the United States with at least one device fielded in every state. The enhanced power of HPMS enables MX908 to provide civilian, federal and military responders with new and improved target detection and identification capabilities. This includes increased sensitivity that is up to 1,000 times greater than previous generation devices, and a new simultaneous dual-mode ionization for even broader threat category coverage.
“M908 continues to bring unprecedented and sorely-needed capabilities to the first responder toolkit, but we didn’t want to stop there,” said Dr. Kevin J. Knopp, President and CEO, 908 Devices. “It is critical that first responders keep pace with growing threats, which is only possible through continuous innovation. This belief has guided our tireless R&D efforts to strengthen and expand the applications of our HPMS technology by way of MX908.”

With MX908, elite responders will benefit from unmatched versatility and detection power. The device features an upgraded all hazards target list, which includes a broader spectrum of chemical warfare agents (CWA) as well as explosives and high-priority toxic industrial chemicals (TIC). From military grade, commercial and improvised explosives to novel threat materials, MX908 empowers responders to solve the challenges associated with today’s threat landscape. The MX908 target list will continue to evolve to include new threat categories that will address the chemical dangers currently fueling community epidemics, public safety concerns, and military response.

“This landscape is extremely diverse, with responders constantly managing the disparity between fighting the familiar while also facing countless unknowns,” said John Kenneweg, Vice President, 908 Devices. “With the launch of MX908, we are delivering a next-gen device designed to address a wider range of applications, equipping responders with the detection and identification capabilities they need to combat today’s modern threats.”
MX908 weighs just 3.9 kg (8.7 lbs.) and was purpose built to serve as a multi-mission device. Its enhanced sensitivity and selectivity enables responders to displace other pieces of equipment in their toolkit, thus lightening the load associated with response missions. Similar to M908, MX908 is easy-to-use, shelf-ready and provides rapid chemical detection and identification of solids, liquids and vapors within seconds.