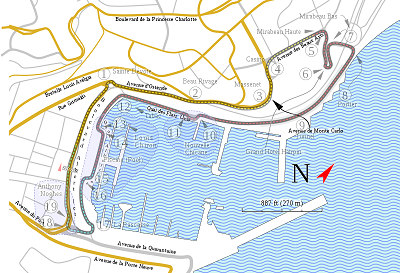 24th May, 2012 - For the second time in two years, EOD technicians have been called to the Monaco Grand Prix circuit in Monte Carlo to carry out a controlled explosion of a suspect package ahead of the annual race this weekend. Last year the package was declared safe; this year however, the package was confirmed as suspect and the local area around the media centre was immediately closed off.

Experts inspected a small, white box said to contain explosive material and, before detonating, ordered a small crowd that had gathered to watch them work to move a further 20 metres away. The explosion, which occured close to Rascasse (17 on the map below), the McLaren garage and the motorhomes of Formula One president Bernie Ecclestone, is said to have caused a significant amount of noise and debris.

The Monaco Grand Prix is one of motor racing's most celebrated events, drawing the rich and famous from across the world. After two successive breaches of security and the discoveries of two IEDs so close to the heart of the sporting action, local police will have their work cut out ensuring that the weekend's events run safely.