Over the spectral rainbow

Raman has long been a part of the hazardous substance interrogation tool bag in laboratories.  In the past fifteen years, new field-portable instruments have enabled its application at military checkpoints, on hazmat calls or for airport liquid screening. It closed a gap when terrorists were using liquid explosives and has since been utilised as a way of interrogating a whole range of bulk liquids and solids. Yet as users have become more comfortable using the technology and the technology advanced, it’s  application space has increased to include new materials, overcoming fluorescence, and characterizing materials within sealed containers. Now it is pushing the envelope of trace detection as well as stand-off/proximity detection.

Raman now has a wide variety of paths open to it… but it is not to say that some of these aren’t dead ends, and simply having application does not make it the choice. One of the best people to lay out potential paths and pitfalls for Raman is Dr Christina Baxter, CEO of Emergency Response TIPS. Dr Baxter has 25 years’ experience of watching technology move from nascent to maturity and as CBRNE programme lead at the Department of Defense's Combating Terrorism Technical Support Office (CTTSO) she was responsible for managing domestic and international CBRNE research and development. Being connected to both the US government detection complex as well as industry, she is ideally placed to discern which rainbows have gold at the end, and which have only cowpats.

Dr Baxter felt that there were four broad thrusts that Raman companies are using to expand their offerings and applicability in the field. “The reason that Raman instruments have found such success in field operations is due to big improvements in lasers, optics, detectors, and software techniques. The areas where significant changes are happening includes: sample presentation such as raster scanning; surface enhanced Raman spectroscopy (SERS) to decrease limits of detection; spatially offset Raman spectroscopy (SORS), like Cobalt/Agilent, that can see through containers; and finally, Pendar that can do a bit of stand-off. When you add up these new developments and more there will be a huge change in overall capability in the next couple of years.”

The main issue that plagued Raman’s field applications was fluorescence.  Over the past few years, many companies have started moving away from the traditional 785 nm laser and moving towards higher wavelengths, such as 1064 nm.  This has become possible due to the increase capability in optics, lasers, and detectors. Historical attempts to bring 1064 to the field had not been successful, largely for the typical ruggedization issues that come from fielding benchtop systems.

One of the problems that Raman has had, for example, was in dealing with sample presentation. This had been translated by the user community as having problems with mixtures. Yet it was not the sample that was the problem but the fact that there was only one sampling point. Once additional sampling points could be done then mixtures no longer posed a problem. One of the solutions to this was SERS, which allowed trace samples to be identified, as Dr Baxter explained;  “There are two different types of trace, the sort where it is not visible to the eye, and trace in terms of a small percentage of the whole. In the small percentage of the whole there are techniques, used by companies like Pendar, that are using raster scanning to improve spectral collection across multiple points within the sample.   Any of the systems that employ raster scanning, getting multiple points rather than staring at one point, have a better chance of identifying multiple components within a non-homogenous sample. Once you add better algorithms to the mix then you have a real capability for getting there.”

The algorithms are key to the solution. For some technologies, such as mass spectrometry, the purchase of a National Institute of Standards and Technology (NIST) library solves many of the signature issues. Raman libraries are continuously under development.  Advanced mathematical techniques allow for 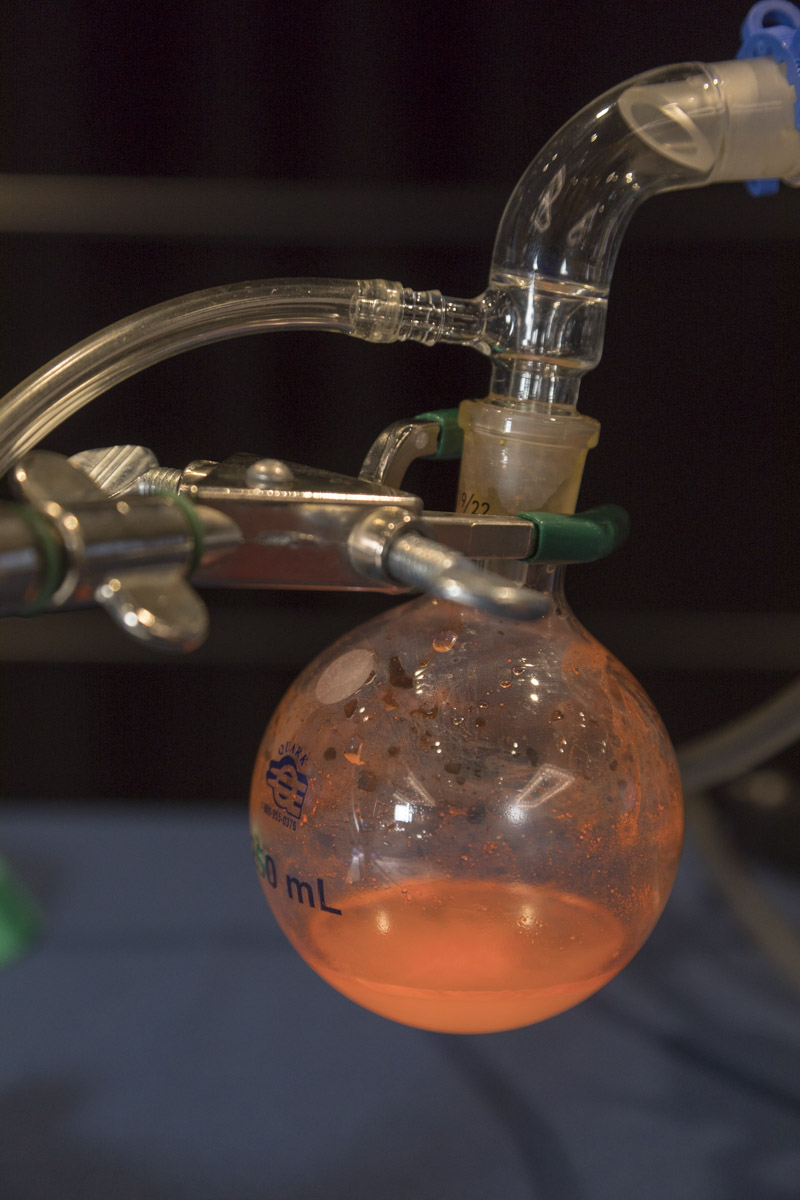 Raman libraries to be applied across multiple platforms allowing for the use of standard spectral libraries. This was at least the case traditionally, as new techniques come along they need to go back through the library building phase as the libraries will be specific to the SERS analyte, and for exotic chemical warfare agents this can be expensive and not all companies will want to stay the course if they can’t guarantee a  return. Dr Baxter stressed there were no short cuts. “The SERS capability differs vastly between companies, as does the way they have approached it. SERS offers an exceptional opportunity to be exploited in the next five years.”

Currently there are two companies working the stand-off (what Dr Baxter prefers to call ‘proximity’) path, Metrohm and its Mira DS, which has an ‘add on’ and Pendar with its X10, which is a dedicated stand-off/proximity system. Dr Baxter stated that she couldn’t comment on the Mira stand-off capability as she hadn’t had a chance to test with it, but that the X10 was the first true proximity Raman detector on the market, and it would have its competitors before long.

The early adopters in the Raman first responder community initially saw the device as a wonder device that allowed them to interrogate unknowns safely, even if they were still undergoing a reaction. This has been thoroughly discredited as some substances, such as energetics, can have an adverse reaction when a laser is shone at them, and now best practice would be to reduce the quantity of bulk samples to such an extent that if they do go exothermic it is only in minute amounts. Dr Baxter stated that changes in the modus operandi of the criminal/terrorist organisations had only made it harder.

“The answer is: it depends! We see poly-labs more and more often, making more than one type of material. Using the naked eye it is difficult to differentiate between meth, triacetone triperoxide explosive (TATP), fentanyl and hexamethylene triperoxide diamine (HMTD); if you put too much energy into two of those you can be sure of a bad day!”

Dr Jarrad Wagner, director and associate professor at Oklahoma State University (OSU) center for health sciences & OSU forensic toxicology and trace laboratory, gave a great presentation at CBRNe Convergence 2017, on what can happen when you put too much energy into explosive samples, for example. It is something that you would like to be at an underwear-safe distance from! In the past, lower energy lasers have not been popular with stand-off as the signal is already weak enough, and once you move it away from the sample you have to increase the power to balance the signal loss.

Pendar have now suggested they can offer 60-100cm {24-39in}, in a low energy laser which mitigates the problem of provoking the sample into something rash.
Now the user starts to wonder about how to use this capability. Is it possible, for example, to use proximity Raman to triage a crime scene? When an officer finds a bench crowded with visible samples can they get a quick idea of what they are looking at, or does the capability just increase the safety envelope by a few more centimetres?
“The reason I got excited about the Pendar X10 is its combination of raster scanning, advanced optics, simple software interface, low energy laser, and the proximity stand-off detection capability…in essence, it separates the user from the hazard while providing excellent spectral results.”

As we see these different paths develop is there a desire for omni-capable Raman? Either one that shares common components, such as power, form factor and software, with interchangeable mission modules, or an almighty system that might require a truss for safe lifting but saves the need for four to five pelican cases? Dr Baxter felt not: “I don’t see a need in the market for that. What I do see is the need for improved optics, sample presentation, software, standoff capabilities, and for the further development of SERS capabilities. If anyone wants to stay in the market where we are looking for lower and lower levels of product, then their SERs capability will pull them away from everyone else. Thermo, Metrohm, Cobalt and B&W Tek all have SERS applications, and everyone is working towards it.”

Yet it is not just hazmat/CBRN techs that are interested in Raman, forensic science is already using it[1] for things like explosive residue and serology. This is a different application of the technology, and usually applied via a Raman microscope, but is there a chance that once the hazmat team have dealt with a situation, the scene of crime officers will come in and remove the hazmat elements, replacing them with forensic ones? Dr Baxter suggested this might be scientifically possible in the near future. “I have seen several patents out there for trace level Raman that would be used for fingerprints. One patent that was put out and awarded [to Dr Fountain’s team at Edgewood Chemical and Biological Center. Ed] was about using Raman as a technology for measuring explosive particulates in fingerprints. Those things have a completely different design, but that is where Raman is going in forensics. The challenge is whether you can develop an instrument that is cost effective and has the capability needed in that environment. The marketplace is so small. For example, in the US we have thousands of police departments each with its own forensics capability but the instrument cost is a challenge. If you go to Europe and Australia, where there are country wide departments they are more likely to have the economic capacity for something like that, but there are fewer of them.”

The other area where Dr Baxter sees numerous opportunities for Raman is industrial hygiene where, like pharmaceuticals, the expensive research can be done for a more buoyant market than defence and security, and re-applied in security and defence, as was done for Cobalt/Agilent and their SORS. Short of some miracle device, where does Dr Baxter see the market going? “What I see in the next three year period is major improvements in sample presentation, including SERS and raster scanning, and expanding applications further into SORS and proximity detection.  In addition, software improvements and standardized libraries will assist in the broadening of applications. Once you go out to the three to five year mark, other companies will be coming up with proximity and early stand-off to compete with Pendar and Metrohm. The ways people will get there will be different, though some might follow Pendar and do proximity others might try and fit their current system onto UGVs and UAVs, using a different form factor. Pendar did it in the robot rodeo last year, where they integrated robotic operations and this will see people further away from the sample. In the 10 year time frame we may have the point and shoot tricorder!”